In 2020, Frederick White Soft Winter Wheat was grown in Independence Township on 5 fields, totaling 8.2 acres on the farm established by R. Meloy, Esquire in 1829.  Meloy was a farmer, grain, stock and wool grower.  More recently the farm was a dairy farm and a cattle farm.  Weatherbury Farm has farmed this land since  2015.  The farm has been certified organic since 2006.

Clover was frost seeded into the Frederick Wheat on  April 3, 2020. (The clover suppresses weeds, aids in holding up the grain and, eventually provides nitrogen to the next crop.) And as to taste — cornbread made with Weatherbury’s  pastry flour  and cornmeal won 2nd place in 2019.  The cornbread placed at the county fair 5 out of the past 6 years. 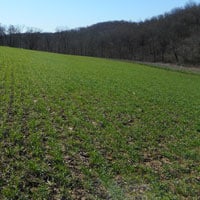 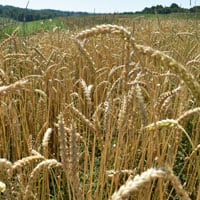 Field of Frederick Soft White Winter Wheat.  In three months, the wheat has grown from a tiny shoot to a nearly mature plant. 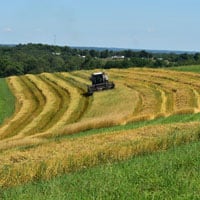 As you can see in the photo, Weatherbury’s grains are grown in 100 ft wide contour strips, with clover hay fields above and below the field of grain.  This is done to minimize erosion on the hilly land we farm. 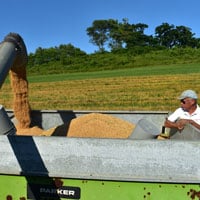 After the Frederick Wheat is harvested by the combine, it is unloaded into a gravity box to be transported back to Weatherbury Farm. Farmer Dale oversees the unloading and dreams of future cakes and cookies.