One of the world’s healthiest foods. Buckwheat provides a high quality protein with all eight essential amino acids.
One of the best sources of protein in the plant kingdom.

Milled from Organic Whole Westsylvanian Buckwheat grain grown at Weatherbury Farm. The hulls have been sifted out.

Stone ground  flour with a hearty flavor.  Ground in one pass and sifted through a very coarse sieve so that any very large pieces of hull are removed. 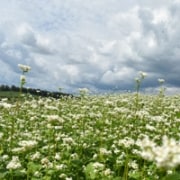 Buckwheat in Bloom at Weatherbury Farm

Weatherbury Farm’s Buckwheat Flour is unique — it is traceable back to the field where it was grown!

Imagine having a brunch party and serving buckwheat pancakes (or any other of the delicious products possible with Weatherbury’s Buckwheat Flour) — and one of your guests comments on how delectable it is.  You pull out your cell phone and click on Weatherbury’s Buckwheat Tracker, say “Let me show you how the grain was grown that the flour was milled from.” 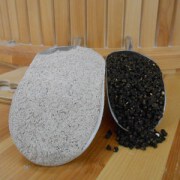 Organic Buckwheat Flour and Buckwheat Grain in the hull

Buckwheat can add both tase and texture to your baked goods. Buckwheat pancakes are the quintessential breakfast food, but buckwheat flour can also be used in muffins, breads, pasta, scones ,coffee cakes, cakes, and cookies

Our “buckwheat pancake” recipe is on the Buckwheat Flour package back.  Additionally, our recipe book which is included with your first  order has an old fashioned overnight buckwheat cakes recipes (with yeast).

Both the terroir of the soil and  the fact that our buckwheat flour is stone-milled give it its wonderful flavor.

How to substitute Weatherbury Buckwheat Flour in your own recipes

Instead, in a recipe that does not use yeast, up to 25% of the flour can be replaced with Weatherbury Buckwheat Flour.

Up to 15% of all-purpose flour or whole wheat flour in a yeasted recipe can be replaced by Weatherbury Buckwheat Flour without making changes to the recipe.

When you use Weatherbury Buckwheat Flour in baked goods, you not only enhance the taste but make them more nourishing.

Buckwheat provides a high quality protein with all eight essential amino acids and is one of the best sources of protein in the plant kingdom.

Buckwheat contains Rutin, a phytonutrient, which is an important antioxidant for heart health supports liver, brain and digestive health.  It also contains the antioxidant Quercetin.

While Buckwheat is rich in manganese, copper, magnesium, iron and phosphorus, it is lower in vitamins that other pseudocereals and cereals.

But it sure does tastes great.

Buckwheat is believed to have originated in Southeast Asia 5000 to 6000 years ago. In the 14th century, it came to Russia from Mongolia and then spread throughout Europe.  Since then, Buckwheat has been providing essential nutrients, vitamins, energy, and ﬁber to humanity. Buckwheat arrived in the U.S. with the European colonists. And, since that time, can be found growing in just about every corner of the globe.

Buckwheat — not a grain, but a pseudo-cereal 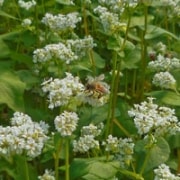 Buckwheat Flour in the field

While buckwheat can be planted in the spring, at Weatherbury Farm it is planted after our wheat is harvested in July to provide two crops in one year (an excellent soil utilization strategy).

Buckwheat is surrounded by a hull which is removed in milling.  The hulls make excellent garden mulch.

Despite its name, buckwheat actually doesn’t contain any wheat or the protein gluten. It is milled, however, on the same mill as wheat at Weatherbury so traces of wheat may remain, despite purging of the mill between flour types.

In the not too distant future (we hope), Weatherbury Farm will be dehulling buckwheat and providing buckwheat groats.  The dehuller we purchased needs some fine tuning first.