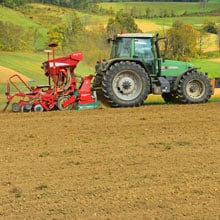 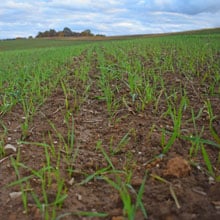 Just four weeks after the planting, the wheat has germinated.  It will continue to grow through the winter. 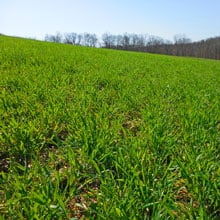 Frederick Soft White Winter Wheat emerging from Winter. You can see how the wheat has grown over the winter.

This is what the wheat looks like when the farmers frost seed the field.  Nigel estimates that they walk 40 miles each year frost seeding clover into the grains that were planted the previous fall. 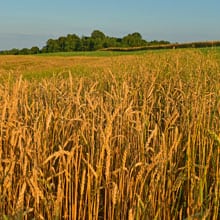 In just three months, the wheat has grown from a tiny shoot to a plant, and is almost ready for harvest. 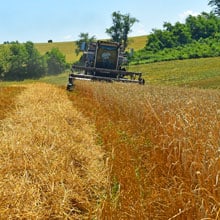 The threshed grains are retained in the body of the combine.  The straw is deposited from the rear of the combine back unto the field.  We either bale the straw (seen to the left of the combine) to use for animal bedding or leave it in the field, where it will increase the organic matter of the soil.

Increasing the organic matter of the soil is one of the best ways to counter global warming.

After the Frederick Wheat is harvested by the combine, it is unloaded into a gravity box to be transported back to Weatherbury Farm. 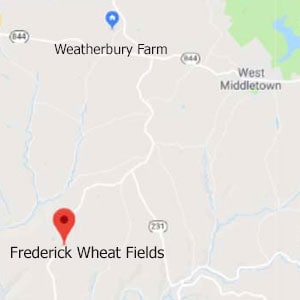 In 2022, Frederick White Soft Winter Wheat was grown in Independence Township on 3 fields, totaling 5.704 acres on the farm established by R. Meloy, Esquire in 1829.  Meloy was a farmer, grain, stock and wool grower.  More recently the farm was a dairy farm and a cattle farm.  Weatherbury Farm has farmed this land since  2015.  The farm has been certified organic since 2006.

Clover was frost seeded into the Frederick Wheat on  April 15, 2022. (The clover suppresses weeds, aids in holding up the grain and, eventually provides nitrogen to the next crop.) And as to taste — cornbread made with Weatherbury’s  pastry flour  and cornmeal  placed at the county fair 7 out of the past 8 years, winning 4 First place awards and 3 Second place awards.  Recipes using Frederick Pastry Flour range from pancakes to cakes (including our personal favorite butter cake), cookies and cookies.