Pastry Flour, which is made from Frederick Wheat, is unbelievably tasty and a great way to punch up nutrition in cakes and pastries. (Wheat is an excellent source of protein, dietary fibers, manganese and selenium. Additionally, the complex carbohydrates in wheat keep you feeling fuller longer and give you energy over a longer period.)

In 2018, Frederick Wheat was grown in Independence Township on 5.5 acres on the farm established by R. Meloy, Esquire in 1829.  Meloy was a farmer, grain, stock and wool grower.  More recently the farm was a dairy farm and a cattle farm. Weatherbury Farm has farmed this land since 2015.

For a more detailed explanation of how Weatherbury grains become flour, visit the from seed to flour page.

More information on Frederick Wheat and other grains grown by Weatherbury Farm are on the grains we grow page.

To read more about pastry flour (made from Frederick Wheat), please visit our products page.

Pastry flour can be ordered on our order page. 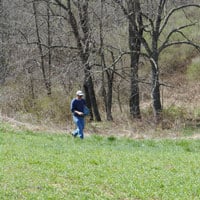 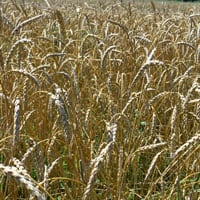 Frederick Wheat Field : Look closely and you can see the frost-seeded clover in the undergrowth. 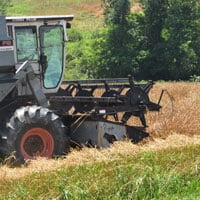