In 2020, Wapsie Valley Corn was grown in Independence Township on  6.1  acres on our home farm.  The farm is part of a 436 acre grant  (known as Extravagance) surveyed to John Doddridge on April 6,1786.  According to the Caldwell Atlas , the farm was established by M.T. Murdock in 1825.  Murdock is listed as a farmer, grain, stock and wool grower (with 150 sheep). The farm was later a dairy operation (the Patterson family: 1945-1966) and a cattle operation (the Eastham family: 1966-1986).  In 2008, we began raising historical grains on both the home farm and neighboring farms.  The grains were certified organic in 2009 .  In April 2014 Weatherbury Farm began stone-grinding flour. Weatherbury Farm  also raises grass fed beef.

The Washington County Fair was not held in 2020.  However, at the 2019 Washington County Fair, the corn ears won 1st place and the jar of corn won 1st place.  While the corn stalks did not place in 2019, in both 2016 and 2017 Weatherbury’s corn stalks placed 1st — beating all the GMO corn in the county!  And as to taste — cornbread made with Weatherbury’s cornmeal and pastry flour won 2nd place in 2019.  The cornbread has placed at the county fair 5 out of the past 6 years.

For an illustrated explanation of how Weatherbury grains become flour (and how corn becomes cornmeal and polenta), visit the from seed to flour page.

More information on Wapsie Valley Corn below the pictures! 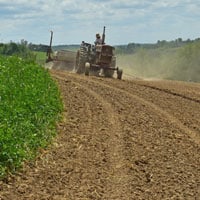 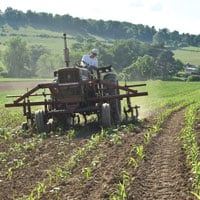 Farmers who raise GMO corn simply spray their fields with glyphosate (roundup)  to get rid of weeds. Since Weatherbury’s corn is organic, we rotary hoe and cultivate the corn to control weeds.

Look at the right side of the picture to see how the cultivators have physically removed the weeds. 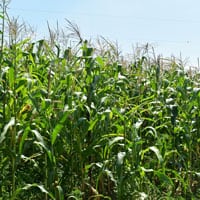 Cornmeal and Polenta in the field! 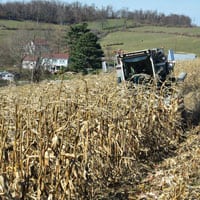 Harvesting Corn with our Gleaner combine 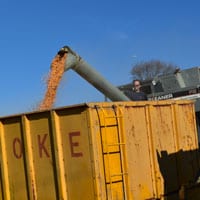 Unloading the corn into a wagon for transport to storage

Wapsie Valley Corn is an open-pollinated heirloom dent corn dating back to the 1850s.  It produces ears of either all coppery red or all dark yellow

Polenta and cornmeal are both milled from Wapsie Valley corn, which has both a visual and flavor punch.

During the past six years, cornbread made with Weatherbury’s cornmeal and unbleached pastry flour has won three first place ribbons and two second places at the county fair.

Corn is a rich source of vitamins A,B,E and minerals (phosphorus, magnesium, manganese, zinc, iron and copper).  With a high fiber content, it plays a significant role in preventing digestive ailments.  It is rich in phytochemicals which provides protection against a number of chronic diseases, such as Alzheimer’s.

Polenta and cornmeal can be ordered either for our monthly on-farm pickup or you can have your order sent to you.

To read more about polenta and cornmeal, please visit our products page.

More information on corn and other grains grown at Weatherbury Farm are on the grains we grow page.