With their mild flavor, organic Admiral Perry Navy beans are popular as baked beans, in soups, stews and even desserts.
And of course, in the famous Senate Bean Soup. 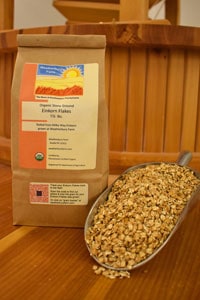 Suited for everything from baked beans to soups and desserts. 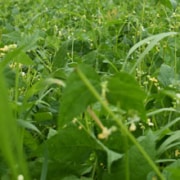 Weatherbury Farm’s Admiral Perry Navy Beans are unique — they are traceable back to the field where they are grown!

Weatherbury’s Admiral Perry Navy Bean Tracker  traces the beans back to the field where they were grown, here at Weatherbury Farm.

Weatherbury Farm is one of a handful of farms that produces local beans  (grown, cleaned and packed on the farm).  But we take it a step further and provide, through our grain tracker, complete traceability — information & pictures of how, when, and where the grain was grown.

Imagine you are serving white bean blondies made with Navy Beans for dessert.  You can pull out your phone and show folks the field where the beans were grown. 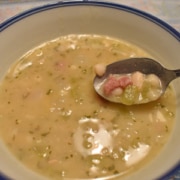 With their mild flavor, navy beans are popular as baked beans, in soups, stews and even desserts.  And of course, in the famous Senate Bean Soup .

Use in: casseroles, baked beans, and soups .

Directions for preparing the beans are on the package back and in the cookbook you receive with your first order.

The recipe for Weatherbury’s version of Senate Bean soup is available in our online recipes section.

The terrior of the soil of the soils at Weatherbury Farm give the navy beans their wonderful flavor.

How to substitute Navy Beans in your own recipes

Use in recipes calling for navy beans.  With their mild flavor, use navy beans as baked beans, in chili, bean burgers, pastas, enchilladas and tortillas, salads, soups and even desserts (cookies, bread pudding and white bean blondies). 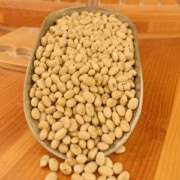 When you use Weatherbury’s Admiral Perry Navy beans, you not only enhance the taste but make the dish more nourishing.

Navy beans provide a good source of protein, with one cup providing about 15 grams.  White beans contain about 28% of your daily phosphorus requirement. They are also a good source of folate, manganese, copper, iron and thiamin (vitamin B1).

One advantage of dried beans over canned beans is that canned beans, because of the canning process, may be high in sodium, which could affect the health of folks with high blood pressure.

And best of all, they taste great.

Keep the beans in a cool, dark, dry place.  Dry beans will, over time, take longer to cook (but they still have great flavor).

Beans should be soaked overnight before cooking to achieve optimum texture and flavor.  Recipe is on package back and in our cookbook. 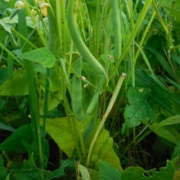 Three weeks after blooming, the navy beans have formed.

Beans were one of the first foods that were gathered and prepared by humans.  Black beans were first  consumed in Mexico and South America about 7,000 years ago.  For 1000s of years, beans have been a staple food in Peru and southern Mexico.  Because the Indian tribes of central and south America traded with other tribes, beans gradually spread over the Americas.

Around the world, beans are a diet staple.  Beans offer high proteins to people who do not eat animal protein in sufficient quantities.

Because of their long storage life, great nutrition and low cost, the U.S. began issuing beans (eventually called navy beans) in the 19th century as standard rations for sailors on their warships.

Other beans available from Weatherbury Farm: