Black Turtle Beans are a nutritional powerhouse, loaded with protein, fiber, molybdenum, copper and zinc.
They have more antioxidant benefits, gram for gram than other beans. 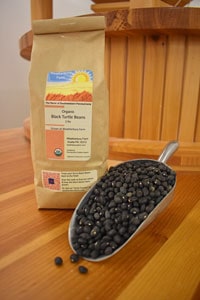 With their rich full flavor, black turtle beans are suited for everything from baked beans to soups to Latin cuisine. 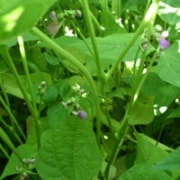 Weatherbury Farm’s Black Turtle Beans are unique — they are traceable back to the field where they are grown!

Weatherbury’s Zorro Black Turtle Bean Tracker  traces the beans back to the field where they were grown, here at Weatherbury Farm.

Weatherbury Farm is one of a handful of farms that produces local beans  (grown, cleaned and packed on the farm).  But we take it a step further and provide, through our grain tracker, complete traceability — information & pictures of how, when, and where the grain was grown.

Imagine you are serving chili made with Zorro Black Turtle Beans.  You can pull out your phone and show folks the field where the beans were grown. 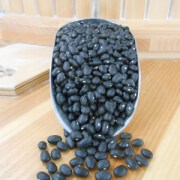 Directions for preparing the beans are on the package back and in the cookbook you receive with your first order.

The terrior of the soil of the soils at Weatherbury Farm give the black beans their wonderful flavor.

How to substitute Black Beans in your own recipes

Use in recipes calling for black beans.  With their rich full flavor, black turtle beans are suited for everything from baked beans to soups to Latin cuisine. After harvesting, our beans are cleaned in three or four separate operations.

When you use Weatherbury’s Zorro black turtle beans, you not only enhance the taste but make the dish more nourishing.

One advantage of dried beans over canned beans is that canned beans, because of the canning process, may be high in sodium, which could affect the health of folks with high blood pressure.

And best of all, they taste great.

Keep the beans in a cool, dark, dry place.  Dry beans will, over time, take longer to cook (but they still have great flavor).

Beans should be soaked overnight before cooking to achieve optimum texture and flavor.  Recipe is on package back and in our cookbook. 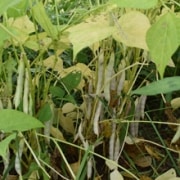 Organic black turtle beans have formed on the plants.

Around the world, beans are a diet staple.  Beans offer high proteins to people who do not eat animal protein in sufficient quantities.

Black beans are quite difficult to grow in our area (witness our crop loss in 2016 and 2018).  We plant Zorro Black Turtle Beans because their mounding characteristic shades out weeds.

Other beans available from Weatherbury Farm: