Oberkulmer Spelt is an old Swiss landrace, a pure spelt with no modern wheat genetics.
Prized for its superior nutrition, Weatherbury’s rolled spelt offers a new dimension for breakfast and for use in other recipes. 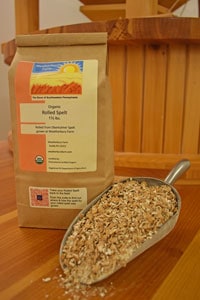 Rolled to order from Oberkulmer Spelt grown at Weatherbury Farm.

A great way to add a tasty ancient grain to your diet.

Weatherbury Farm’s Rolled Spelt is unique — it is traceable back to the field where it was grown! 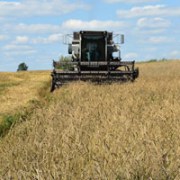 Weatherbury’s Spelt Tracker  traces the Oberkulmer Spelt grain that is rolled into rolled spelt back to the field where it was grown, here at Weatherbury Farm.

Weatherbury Farm is one of a handful of farms that produces local rolled products (rolled from grains grown on the farm).  But we take it a step further and provide, through our grain tracker, complete traceability — information & pictures of how, when, and where the grain was grown.

When you serve  Weatherbury’s Rolled Spelt either as a delicious breakfast cereal or use them in making pancakes, cookies etc.,  you can pull out your cell phone and click on Weatherbury’s Oberkulmer Spelt Tracker and let folks see the spelt in the field. 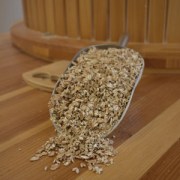 Weatherbury’s rolled spelt offers a new dimension for breakfast and for use in other recipes.

Rolled spelt can be used to make pancakes and in many baked goods from scones to muffins.

The terrior of the soil gives our rolled spelt  its wonderful flavor.

How to substitute Weatherbury Rolled Spelt in your own recipes

For quick breads (like banana), pancakes, cookies and muffins, you can use Weatherbury’s Rolled Spelt 100% as the recipe states.

When you use Weatherbury’s Rolled Spelt as a breakfast cereal or in baked goods, you are sure to get comments about their great flavor.  You needn’t tell the family that they are also more nourishing because they are rolled “live”.

Oberkulmer Spelt, a Swiss landrace with no wheat genetics; it has not been hybridized as many newer spelt varieties have been.

Spelt is one of the healthiest foods.  Prized for its superior nutrition, spelt is higher than wheat in protein, minerals and vitamins and lower in calories than wheat.  It is gentle for the whole digestive tract and strengthens your immune system and your nerves.  With a gluten entirely different from wheat, spelt imparts a nutty flavor.

There are no preservatives in our rolled spelt.  Please refrigerate.  If you will not be using the rolled spelt immediately, please store in the freezer especially in warm weather. Spelt in the hull and spelt berries (after being dehulled)

Spelt arrived in the United States in the late 1800s, but common wheat replaced it in the 20th century. Recently, however, the artisanal and organic movements have revived interest in spelt, not only because it is nutritious, but because of its lovely flavor. Some people who have a wheat allergy or gluten sensitivity report that they are able to eat rolled spelt. However, people with gluten allergies, gluten intolerance or celiac disease should not use it. 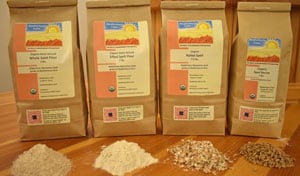